Once there was a very young boy; five, approaching six. He had only begun school recently, although it seemed a long time ago to him; and as far as he was concerned he was progressing satisfactorily in the direction of knowledgeability. At least at the time he thought there could not be not too much more to learn. At school he met a pair of twins, brothers of whom he became much enamored, and they of him. They each had round tow-colored heads and wore crewcuts, but he could tell them apart by certain slight distinctions of shape located around their noses. His family lived in a rented home in the countryside a mile or so outside of a small resort town in northern Wisconsin; the family of his twin friends resided nearby. The boy did not know it, but a monstrous authoritarian state had nuclear missiles aimed at the area where he lived, because his own government, of which he was also basically unaware, had military installments there established in opposition to the same. Such was the world they all lived in. Anyway, the twins did not appear in school for some days, and he learned that they were quarantined with the measles.

It was winter. He lobbied his mother to go out one afternoon; he needed her help to get dressed properly for it, and he knew it. He would be out by himself, but his mother trusted him to stay nearby, because he was eager to take direction and perform according to expectations and had demonstrated his dependability by his deeds. But on this day, he was overcome by longing for his quarantined friends; and after he got out he made his way alone across a very broad field, through deep snow he had to lift his legs high and repeatedly to get through, in bright glare that made his eyes water, which he had not experienced before. Then it was past some tall trees and around a fence and an ancient rusted car, a Model T if he would have known, although he didn’t at the time (just as the entire world was the greatest mystery, but also as any fool could see, plainly self-evident). He went to the door, where he was admitted by a careless custodian watching over the twins. In fairness, she must have thought they were past the contagious stage. At any rate they played for some time on the floor, with shiny metal toy tanker trucks painted red with “Texaco” lettered on the tanker part, bumping over the edges of the rug onto the smooth wooden floor, and rolling into the padded lower extremities of a sofa. The twins each had a tanker of his own, and took turns sharing with him. He had brought nothing to share, but they were happy to have company after their long quarantine and remarked on the epic proportions of the journey he made to get there. It was a very satisfying hour of companionship, perhaps unmatched ever again. Finally, amidst hearty farewells, he was helped back into his things and made the return journey home, through the enormous arctic, following the tracks he had made to get there.
His mother was very upset when he returned and became even more so when he related where he had been, and he received a scolding unlike any other he had yet received. He felt very real grief while being reproached for the whole affair, and his mother made it clear he was not to cross her will like that again. It had not been his intention to cross her will so much as to do his own – there is a distinction to be made - and yet clearly, in preferring his own he had given second shrift to hers. Somehow, he understood that. The boy’s mother remembered none of this when questioned about it many years later, and in fact contradicted it, maintaining that her entire tribe of children got measles at a later date, by which time at least one more had been born into the group than was present at the time of the incident related. The boy, long after he was grown, wondered: had that unrivaled hour of friendship ever occurred? If not, it seemed there was no other hour to step up and replace it.
There is no one to ask about it now, the principle authorities are deceased, so the question remains unsettled. His family moved away from that place more than half a century ago, and he never saw those twin friends of his again. His younger siblings remember having the measles, but none of the incidentals associated with the illness. Were there ever any twin friends of his who lived beyond a vast arctic field, tall trees and a useless old vehicle rusting into the ground, whose matchless companionship was ever after longed for? Who inspired in the life of the boy this allegory of the fall, an exile from the garden that turned on the wayward will, desiring creation and denying the Creator? Oh, the boy had no thoughts like that at the time; only an impulse to do what he wanted which he acted on. The act positively flouted authority, although with a lack of comprehensive understanding and full consent. But even if culpability is limited, make no mistake, the will contrary to authority was active, and its fundamental rebellion was in simply preferring its own satisfaction to the regular order of life, which in this case was that young boys do not wander off in the winter contrary to the wishes of their mothers. He was about as innocent as a human person can be, a soul young and unschooled in worldly ways of rebellion yet was entirely vulnerable to inherent concupiscence. He later become well-schooled in worldly rebellion, according to foolishness acquired from the culture in the process of his formation, a kind of shoddy, venal abuse for which that culture accepts no responsibility (in fact it congratulates itself).
He remained subject to redemption, but only by the Creator’s will, which is entirely gratuitous, and which knows well the blind and mistaken longing of the created to seek the Creator in created things, having walked in his very skin, some millennia ago, and hung on a cross to redeem the debt. By the logic of His love he would have done it just for you and only for you, if you had been the only rebel; so I have been told and have come to understand. The bargain is completed in the willing response of the created, which must be entirely free, and as humble and faithful as it can manage. For the created cannot see, but believing he can trust, even in the deepest dark or most glaring of chills. The offer is extended; it may be taken up or set aside. The blessing, as has been written, or the curse.
One ought to be aware of what one is up against.

This past Good Friday I took part in a silent public procession in St. Paul, MN. Organized by the local community of Communion and Liberation (founded by Servant of God[1] Fr. Luigi Giussani, 1922 – 2005)[2], the procession began with a gathering in the vestibule on the east side of the Cathedral; a song from the group’s choir and a brief address from Archbishop Bernard Hebda, who also accompanied us on our walk during the early part of the procession. We proceeded from the Cathedral north east to the State Capital Building, with a stop on Martin Luther King Drive in front of the capital for the 1st Station, the Arrest of Christ. Here and at each following stop, five in all, there was a reading from a poem by the French poet Charles Peguy[3], the Passion of the Gospel of John, a reflection from the writings of Fr. Giussani, a choral selection sung by the choir, and three verses of the Stabat Mater, sung by everyone. Otherwise we kept silence for the two-hour event. 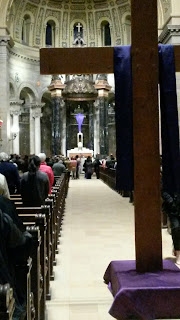 [1] In the Catholic Church, the term “Servant of God’ denotes a person being investigated by the Church for canonization to sainthood.
[2] Fr. Luigi Giussani was founder of the international group Communion and Liberation. He stressed that for each person Christianity was essentially a relationship with Jesus, and that the morals and theology of the Church all emerge from this relationship.
[3] Peguy (1873 – 1914) was a French poet, essayist and editor. His thought was an unlikely blend of socialism and Catholicism. He was killed on the western front in France at the beginning of the First Battle of the Marne in WWI.
All the scripture quotations are from the Gospel of John.