“The Virgin, weighed
with the Word of God,
comes down the road:
if only you’ll shelter her.”
St. John of the Cross, poem 13, Christmas Refrain.

May is over, but as we proceed I want to remind readers that in the Catholic world, May is also known as Mary’s month. That would be the Blessed Virgin Mary, mother of God and Queen of the Universe. Notwithstanding the exalted language, she wants to reign in our hearts from within with our consent, and not over us from without against our consent, with authority conferred by her Son, who at the same time asks us to take her into our homes (see John: 19, 26-27; and the last two paragraphs of this post). And if we did, how could we live proudly or vainly in her presence? All the more reason to remember her during the rest of the year: "If only you'll shelter her."
I am thinking of the recent annual fashion gala at the Metropolitan Museum in New York. Not that they and I are much concerned with each other, but they laid some claims to engaging with what they called “The Catholic Imagination” in a recent event and ongoing exhibit. Their Exhibition Overview states: “The Costume Institute’s spring 2018 exhibition-at The Met Fifth Avenue and The Met Cloisters-features a dialogue between fashion and medieval art from The Met collection to examine fashion’s ongoing engagement with the devotional practices and traditions of Catholicism.” Exhibit overviews and artists in general are prone to make hyperbolic statements regarding the scope and intents of their purposes, so we shouldn’t take any of that too seriously, except to note that the dialogue which is mentioned is really an appropriation; and to remember that fashion statements and devotional practices have very little in common, claims of ongoing engagement notwithstanding. If we do that we resist bewitching. I have read that the exhibit is tastefully done, although the opening gala associated with it, featuring celebrities and fashionistas in “Catholic inspired” costumes varying in degrees of absurdity, is to my mind the perfect scenario of form divorced from content, and an unintentionally suitable epigram for our culture.
What has any of this got to do with sheltering Mary? One can hardly picture the Blessed Virgin Mary involved in any gala. Perhaps less clear is that she would not despise one either, as I am prone to; but when I despise I act out of pride, and she never acted out of pride. At the Annunciation she prayed:


“My soul proclaims the greatness of the Lord, [italics added] my spirit rejoices in God my savior, for he has looked with favor on his lowly servant. From this day, all generations shall call me blessed. The Almighty has done great things for me and holy is his name. He has mercy on those who fear Him in every generation. He has shown the strength of his arm, he has scattered the proud in their conceit, he has cast down the mighty from their thrones and has lifted up the lowly. He has filled the hungry with good things, and the rich he has sent away empty.” [Luke 1: 46-53]

These words of Mary from the Gospel of Luke are known as The Magnificat. Uttered by a teenage Jewish girl moved to consent by the spirit of God to allow Him to become active in her life, they announce the true subversion of the world by Love, the ground, as it were, in which the cross is planted; the sedition for which she would have been roasted alive, had the powers of the world known her. But they didn’t know her then, and they don’t know her today. Even now that Christianity is two millenia old, we rarely see these words as being at odds with the kind of piety generally associated with the Blessed Mother, and we don’t think about how opposed to the order of things as we know them that these words are. To speak of casting down the mighty, scattering the proud, and lifting up the lowly is to speak of upheaval, of overturning the established order of the world. For all of that, they are not proud or boastful words. They do not threaten violence or bloodshed. They are worshipful of God and speak in faith of the mercy He will bring about through the ultimate injustice, the Cross. Mary believes He will bring mercy and victory over sin and death, although she doesn’t yet know how. The victory is won and the outcome is determined – even if all things have not yet taken place - and the resurrection reminds us that it takes place here, on the ground.

Make no mistake about it, even when Christian values are misappropriated by others. For instance, there is a persistent error afloat which designates appropriately Christian values, like the poverty of spirit of the Beatitudes - “Blessed are the poor in spirit”, or charity toward the poor, a Judaic ideal found repeatedly in the Old Testament and developed by Christians in the New, as belonging authentically to Marxism, which is a murderously stupid ideology. I offer the history of the twentieth century, during which it caused tens of millions of deaths, in support my statement. No state, or body proletariat for that matter, can possibly practice the virtue of love, which is what is required of individuals who practice charity and poverty of spirit. That’s why individual communists can seem very impressive in their passion for serving the poor, while collectively they are monstrous. Marxism gets human nature exactly wrong. It supposes that oppressed humans are inherently more just than their oppressors, that it is the act of oppressing that ushers in evil, and not evil that ushers in acts of oppression.  Therefore, once oppressive ruling classes are removed, there is no more barrier to justice. The oppressed are inherently just - on the right side of history, as they say. Even if that were true - and it isn't - the fact remains that the oppressed never conduct these revolutions. Power opposed to power, as it were, always hijacks them; political players go to work. The brand of elitism may change, but the form remains the same. Contrast Communist inspired revolutions, like the Khmer Rouge in Cambodia, with the Catholic inspired Solidarity movement in Poland in the 1980’s, in which workers banded together with the Church took down the mock worker’s paradise of Polish (Soviet) communism, bloodlessly. Charity and love do not translate into Socialist revolution. The Blessed Mother would not have fit into any communist movement, since she trusted the Lord above all things; the party has no use for that.
"If only you'll shelter her." That would be in the spirit, in our hearts. If we investigate and contemplate who she was, we can only be moved to authentic respect and reverence. Then we can begin to form our actions as they arise naturally from that place. 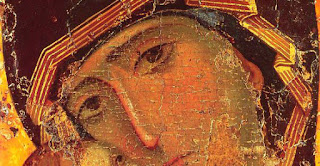