After a frustrating winter of either being thwarted in our painting/photography attempts by weather or missing sessions all together, we got out in late spring and Peter painted one good painting after another. He is truly modest, but I wanted to share photos of him painting because I believe people are interested in seeing how he works. The paintings will soon be professionally scanned and on the web site. 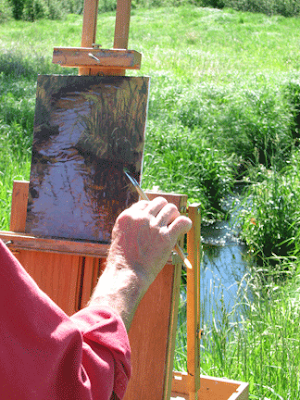 We influence each other. Peter’s paintings now inform how I look at landscapes and I am startled sometimes when I realize I look at actual landscapes through the eyes of his paintings, such as in a recent photograph (below) of a landscape south of River Falls, Wisconsin. It could easily be one of his paintings.

I enjoy seeing him put down in paint what I have been looking at through a lens and admire his ability to look and see color and form so surely. Please note: my photographs of his paintings rarely capture the correct color as compared to the landscape. The colors on the painting and the colors in the landscape almost always look vastly different in the photo, which is not the case. I suspect it has something to do with how pigment reflects light; the painting of the pine tree was taken with a flash on a very cloudy, dark day. The flash would affect the painting much more than the landscape several yards behind it. 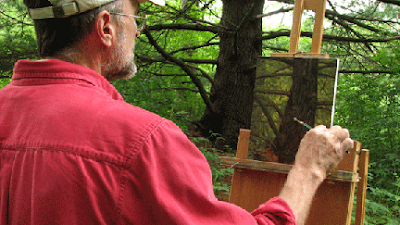 Peter’s ability to handle the medium of oil on board or canvas is especially impressive to me since I have done oil painting in the past, with several years of training at University of Wisconsin - Stout. I know how difficult it is, how easy it is to make mud. I marvel at Peter’s expertise in handling it; to keep the colors true and clear. I know I am not entirely objective, but I also know I am informed.

PS I have thought of a solution to his Shoal painting (which I like very much). If he simply paints a crouching puma on the shoal, it would solve everything. . . .
Posted by Peter Bougie at 12:36 PM 2 comments: 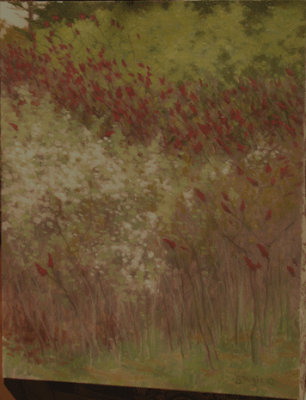 This post continues the discussion of painting in the spring, begun in the previous post. Thanks to Nora for the snapshots of the paintings; they are for the convenience of the reader only. I write about the top painting first.

The following week I tried a spot near the edge of a wood in the countryside near home, at Kinnickinnic State Park, along the St. Croix River. It was a gray day. There was a lot of the problematic color I mentioned earlier, the chartreuse greens and violet grays. I found a spot that had both wild plum blossoms and a stand of sumac whose red berries had survived the winter intact. It seemed to compose well in a vertical format because the masses of color value angled up in a kind of harmonized counterpoint to each other, first to the right and then back to the left, declining in angle as they approached the top of the picture plane, leading to a release point of much greater depth, where the foliage gave way to a bit of gray sky framed by a tree trunk and some dark cedar branches. The white plum blossoms and red sumac were contrasting spots of light and dark color value leading the eye to this. But they also cause the eye to linger where there is not enough of interest to see. This compositional problem makes for a dull painting, no matter how well you might render everything. Not that I rendered everything that well. The plum blossoms had shots of color in them that I did not get – pale oranges and pinks. The gray brushy mass underneath the blossoms was alright in its representation of the mass of value, and even suggests enough of the variety of warm and cool grays, but is lacking in the suggestion of the subtle structures of the brush itself.

The painting was a failure, and it does not feel good at the end of the day. But failures make the ground fertile for success. The seed has to fall before it can sprout.

I often find an antidote to the relentless greens and violets of spring by making compositions that feature water. Water is reflective. Many bodies of water have a local tint influenced by minerals in the area, or the presence of vegetation or whatever might be suspended in the water. Otherwise, big bodies of water are mainly influenced by the color of the sky. A smaller body, like the little trout streams abundant in this area, has that quality too, but is also more affected, because it is narrow, by whatever is along the banks. On sunny days the reflected colors on water are generally more intense than what they reflect, not as dark in the darkest areas as what they reflect and a little darker in the lights. In less intense light or on gray days they match the color of things reflected more closely. The masses of reflected color value are fractured by the patterns of flow in the water, and also affected by wind. These general observations break down if you move in close to one little section of water and observe it closely. Then you will see more of what could be referred to as the local color of the water. If it is clear and shallow, it appears to the eye to be the color of the bottom, sandy or muddy or whatever. If it is deep and murky, it is influenced by the sediment or by the color of whatever is suspended in it.

Color reflected from the sky into patterns on the water makes for unique design opportunities. I pursued this in a recent sketch I did along the Rush River in Pierce County, Wisconsin, north of Lake Pepin. The composition was of the surface of the river, cut at a sharp angle near the top by a pale rocky shoal. Other than the shoal, there was no reference to the banks other than what could be inferred from the reflections. The range was from a warm golden green to deep blue, with shots of warm sandy color in the shallows. There were pronounced patterns of flow defined by sky blues contrasting with deep blues from shadows on the steep banks, and deep greens from aquatic vegetation in holes under the banks. A riffle following the angle of a rocky shoal also caught some of this deep blue reflection and carried it across the painting above the pale colors of the rounded river rock on the shoal.

This painting was a near miss, not a success. I might be able to amend it with another trip to the sight - or I might miss again. As I look at it now it seems that I was doomed from the time I made my decision about how to crop the scene. It left me with shapes in the water in the upper left of the painting that are about the same size as some similar shapes in the lower part of the painting, the part closest to the viewer. Those shapes of similar size in background and foreground violate a natural sense of perspective, producing an unnatural flattening effect ( I suppose that might be a hazard of doing paintings with a shallow depth of field). These same shapes in the upper left are high keyed and intense in color, contrasting with dark shapes in the water in that area, and the contrast causes the eye to linger in that part of the picture. However, the shapes are not interesting enough to satisfy the lingering eye. So it becomes unsatisfied, which is the effect of a bad picture, even a near miss. It is another lesson in the relationship of rendering according to what you see, and composing it within a format. Degas used to accuse the French Impressionists of “Losing consciousness before nature,” and that is part of what he was talking about.
Posted by Peter Bougie at 8:58 PM No comments: