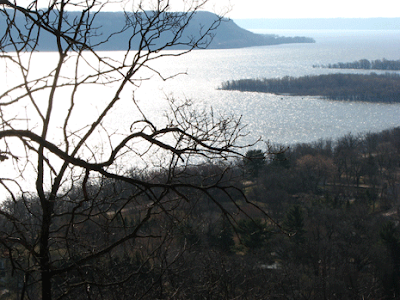 Sometimes you set out to paint and it happens that you don’t. You may go to your studio, or that corner of the attic, basement or spare room that serves as one (well appointed studios are over rated, as are most well appointed things), lay everything out and stare at the blank or incomplete canvas for hours and do little or nothing; or you may drive forty or fifty miles to some beloved or much anticipated location for which you’ve been longing and find that the spirit seems to have deserted you. I suggest it is more likely that somehow you have deserted the spirit, or that the spirit is calling you to pay attention to something else. I could write more about all of that; for now I will just say that sometimes we are led where we would rather not go.

We made another trip to Frontenac State Park along Lake Pepin today. We were there three weeks ago and I had a productive day painting. I did not paint today although I came fully prepared and with the proper intentions, at least in the forefront of my mind. Okay, it was windier and colder than I expected and I could have worn another layer to help keep me warm; still, I found several sheltered locations that would have served. I brought a long, horizontal panel along for composing the wide compositions this location offers abundantly, and a standard sized 11 x 14 as well, just in case. I was anxious to paint. I walked around looking at one long view of blue ridges and sparkling water after another; distant horizon lines fused in sunny haze beyond the sharp, bare terminal branches of burr oaks and red oaks, hickory and basswood waving in the intervening space in the wind. I wanted another successful day, like the one I had last time. In this sense, I had already deserted the spirit. I was not open to what it was offering me.

I hate to go out with the intention of painting, and not paint. It feels like a great defeat. I walked around muttering. Yes, I really do mutter. It’s not a figure of speech I am using to approximately describe a condition. Ask anyone who knows me. I thought of an expression a friend of mine used to use: “Some days its chicken and some day’s just feathers.” I thought of steely eyed Commander Riker on an old Star Trek: Next Generation episode. When the crew of the Enterprise is outmaneuvered by some creepy Romulans, he stands beside Picard as the Captain gives the order to withdraw and says “Some days you get the bear, and some days the bear gets you.” No chickens or bears here, only my over active imagination, and a little sadness and desperation as the beautiful morning passed away, punctuated by the long, deep diesel growl of a freight train in the valley below. Places to go, places to go.

I was physically tired for various reasons. The kind of tired you feel when you have used up reserves of energy and they have not been replenished. I hesitated to begin something that would take several hours of fairly intense effort, with a kind of emptiness waiting at the very end. I value discipline and it usually carries me through. The spirit is present in discipline and perseverance too - more so, in my opinion, than in inspiration, especially in my middle age. However, my discipline – my discipline, this thing I am proud of – was inadequate. Proper discipline – I call it “proper” for lack of a better term, and contrast it with discipline rooted in pride at what I have done or can do – perseveres in a task until it is finished, for some purpose other than self aggrandizement, because it is the right thing to do, but yields when something of equal or higher value calls for some action on my part. Proud discipline can blind me to whatever that need is.

Where was I being led that I would rather not go? Not to martyrdom, like St. Peter. Only to a very brief tomb: the death of my hopes for that morning. And then a walk with my wife, down a path I had never gone, making observations about what we saw here and there; signs of burning from habitat restoration, including the charred stump of an immense cottonwood and the remains of its great trunk on the ground; a ravine with light and shadow patterns suitable for framing, and the end of the trail at a point overlooking the valley bracketed with bluffs east and west, Frontenac below, a red barn with horses in its yard, and Lake Pepin making its great bend to the southeast, the big sweep and sparkle of a great river under the sun. 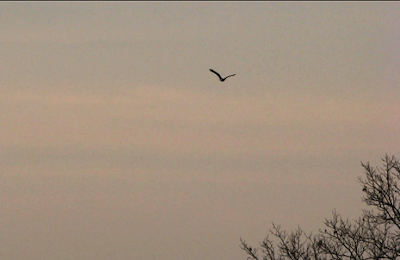 Sunday March 7th, 2010: a mild, cloudy morning. The snow cover continues to thaw. You wouldn’t know it looking across Lake Pepin from the top of “Point No Point” in Frontenac State Park, Frontenac, Minnesota. It’s a vast white plain beginning 500 feet below and continuing to the far side of the lake, where it stops at a border of hazy bluish gray, the forested bottom land of the delta of the Rush River on the Wisconsin shore, about two miles away.

There are ice fisherman on the lake, their trucks parked near them, dangling lines through holes in the ice into the dark water below. The tracks of their vehicles etch the ice in paired lines, silvery gray, crossing and crisscrossing until they fade off into the whiteness of the ice plain. I hear a truck start up now and then, and the metallic rumbles it makes as it crosses a pressure ridge. I am startled occasionally by the singular clarity of a human voice coming up from below. I cannot understand the words but I hear matter of fact, work-a-day inflections.

I’ve started a picture. I remember to be thankful because it doesn't come naturally. I am thankful for this day; thankful for the long dark of Warrentown Ridge, for the haze from the thaw melting into the gray of the sky up the Rush River Valley, and for the faint shadow that is Carson Ridge, millions of tons of ancient sea bottom hardened into limestone and carved by pre-historic floods into a humped shape, velvet gray.

After rubbing in a gray tone, I lay down the shapes of the ridges, the lowering sky, and the snow on the plain. Crows make a racket; an eagle flies by, close enough to see its yellow eye, the hook on its beak; not far away but far beyond my reach. The crows continue to riot for a long time. A buck white tail with stubs of new antlers grazes in the sumac near the top of the ridge a hundred yards up. His hidden mates are a little deeper in the woods, no doubt. He looks a little rough. I spot the lighter areas on Warrentown Ridge, openings in the trees, steep hillside meadows, silvery. A juvenile eagle rises from below, brown and spotted, broad winged. He soars away and a little while later soars back again. The crows are off chasing the elder cousin. I spot the shapes of groves of evergreens, the same shade of blue gray, their shapes distinct. Homesteads, maybe cemeteries.

I shift my weight, and shift again; just cold enough to get stiff. The paint is sticky like it is on a hot day. I’ve kept it in the freezer too long. I squint at a haze of branches, the dull mossy greens in a slender tree trunk. A freight train wails on the Wisconsin side; the clack and the rattle and the deep diesel rumble echo. Then it is still. Cardinals flit from branch to branch. They aren’t singing just now. I turn and look south, where the sun is beginning to blaze through the fog where the lake makes a big bend east, making yellow glare in the sky and on the ice, and the ridges sit like stoics under a cloak of blue frost. The haze is lifting and my time is up, and I have only grasped a little of what I have been given. “Your way led over the sea, your path over the countless waters, and none could trace your footsteps.*”